Apartments Trogir - Browse through our offer of private accommodation in apartments and holiday houses inTrogir, Croatia. Large offer, with most detailed descriptions available. Great prices and fast on-line booking of accommodation for season 2021!

Trogir is a picturesque town arranged with parks where every stone is a monument and its coast is surrounded from all sides by the sea.

The town was settled in the 3rd century, but people lived in this area before. The Greek colony Tragurion was established by seamen, who came from the island Vis. Trogir was famous in the Roman Empire because of its excellent marble. A few reliefs from the antique history of Trogir are preserved like the one of Kairos (4th-3rd century B.C.) and a work, which represents a woman on a loom (2nd-1st century B.C.).

Trogir has been under the rule of the Byzanthian Cezar and his Exarch in Ravenna since Dalmatia became a region - a themate of the East Roman Empire.
A new population settled with the time around the town - the Croats, who wrote the second page in the history of this area. The Hungarian- Croatian king guaranteed the town an autonomy in 1107 and it was on power till the arrival of the Venetians.

The communal autonomy based on the town statute from 1332 and the privileges of Coloman also developed in those centuries. The early Romanic church of St. Barbara from the lllh century is especially worth to mention.

The period from the 13th to 15th century represents the top of the social, economic, cultural and artistic power of Trogir. This was the time of big buildings, the improvement of the fortification system with walls and fortresses, which surrounded the town completely.

This was also the time of the dukes of Bribir from the dynasty Subic, of the humanist and writer Koriolan Cipico and the Croatian Ban Petar Berislavic, who has been famous as a fighter against the Turks in the Croatian history. 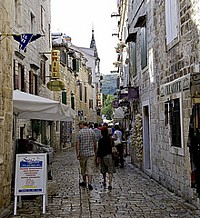 The cathedral of St. Lovre with the famous Portal of Radovan is a church where we can find styles from the Romanic to the Baroque and numerous artists left their traces behind in it. The art collection of the cathedral protects the most worthy culture and art heritage of the town Trogir. It is located on the main square that is the same as in the time of the antique founding of the city.
The cathedral is beside the town hall, court, the town tower and one of the most beautiful palaces - Cipiko.
The influence of Venice is recognizable in the culture and architecture from 1420. to 1797., but the Croatian language survived during the 400 years of the Venetian government, although Italian was also the official language beside Latin. Venice recognized very well the importance of the port, the sea trade and the navigation.

The French government (1806-1814) started a series of changes in the life of the town, especially concerning the schools, economy, agriculture, health service etc.
The Austrian government lasted from 1814 to 1918. In this time the aristocratic families declined more and more and the citizens took step by step the politic and cultural leadership. This was also the time of the Croatian National Renewal and the fight for power between the Autonomy- and the Peoples Party. 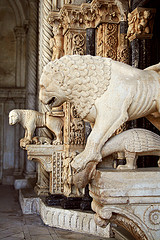 At the beginning of the 20th century new public buildings were built, and the harbor promenade was arranged. After the World War I. the town became part of the Kingdom of Serbs, Slovenes and Croats. Trogir was then part of the Kingdom Yugoslavia and later of the communist Yugoslavia (FNRJ and SFRJ).
The town Trogir has also survived a few wars, including the last Home War, so that it welcomed the end of the 20th century in an independent Croatia. The wealth and the variety of its cultural heritage and the interesting history of the town are the main reasons, why the town is since 1997 under the protection of the UNESCO.

We can say without exaggeration that Trogir is an unavoidable holiday destination!